The minimum requirement for being a team representative is that the representative must add the scores of CUP League games played at home via the website.  If everyone does this, the standings will be current.

The representative can add much more value if they wish.  They have complete editing control over their team page.  They can add rosters, stats, non-league games, team calendar events (such as practices or meetings), photos, news posts, etc. Instructions are given below.

Feel free to report the results of away games as well, if the other team is not reporting them. 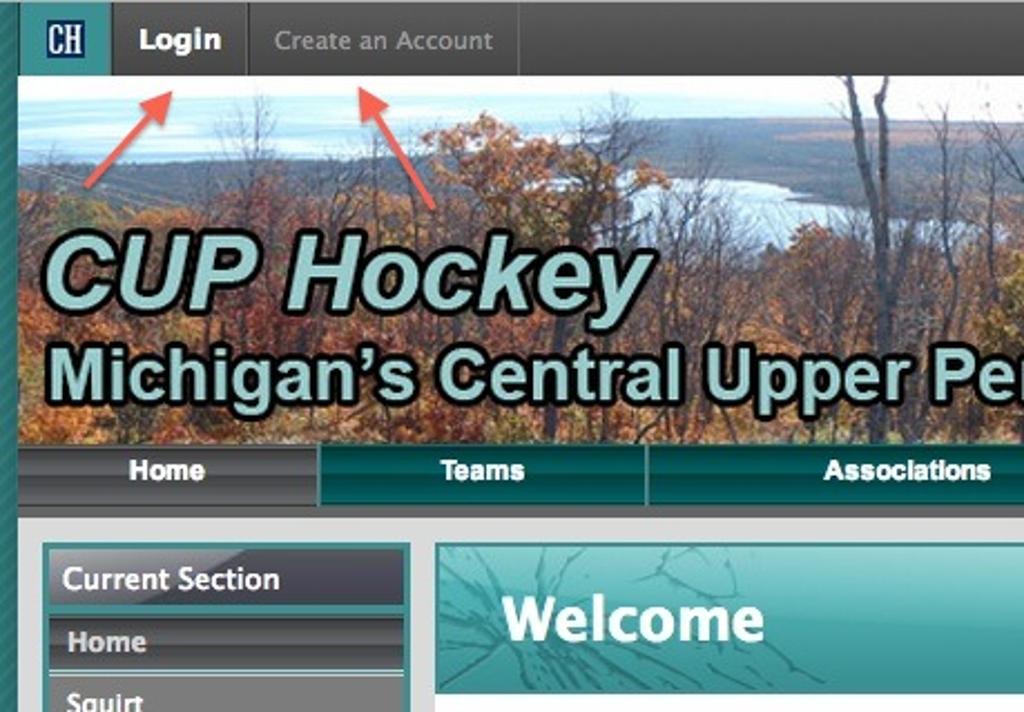 Getting permission to edit your team page and submit scores

You can register online quickly and easily by filling out the Website Representatives registration. The link will be published each year, and is also available at the "website team reps" tab on the left navigation bar.

You will only have to do this once per season.  The webmaster has to change the permissions associated with your account to give you editing permission on your team page.  If you don't hear back within a couple of days, e-mail cup@cuphockey.org

Note:  If you are representing more than 1 team, you will need to register for each team.

Navigating to your team page

If you want to edit your page or add scores/games, don’t forget to log in!

When you get to your team page, if your permissions have been updated, you will see a “switch” in the upper right that toggles between Edit Mode and User Mode, circled below.  "User Mode" shows you what the page will look like to the world, while "Edit Mode" allows you to make changes.  Just click the switch to go back and forth.

When you go into Edit mode, on the main team page, you can add news items simply by clicking the “add article” button.  You can add calendar items, like practices or team meetings, or games that are not on your game schedule list.

You can get super-fancy and add photos, text blocks, and lots of other stuff by adding “Layout containers” and “page elements”.  Play around!

The bare minimum that is required of each team representative is to add the scores of your CUP League games that are played at home.   If everyone does this, the standings will always be up to date.  Feel free to report away game scores if your opponents are not reporting them.

To change game date and time: 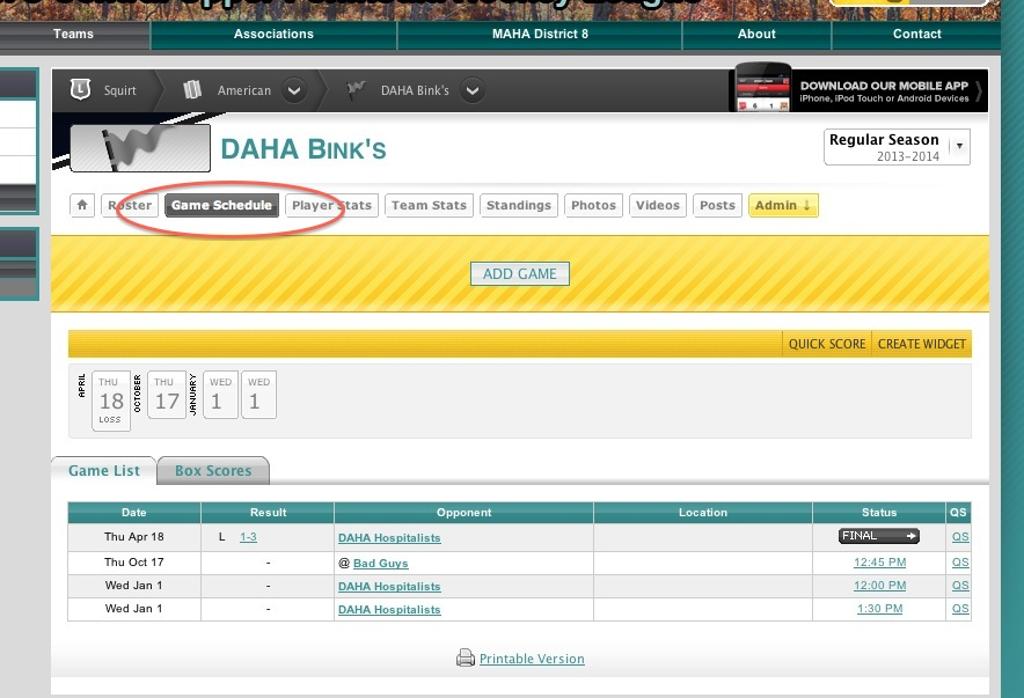 Clicking on the game time or Final button will bring up the “Game” page shown below.  To change the date of the game or other information, click the "gear" icon in the upper right (circled below), and select "edit game details" in the dropdown menu (shown in the second screen capture below.) 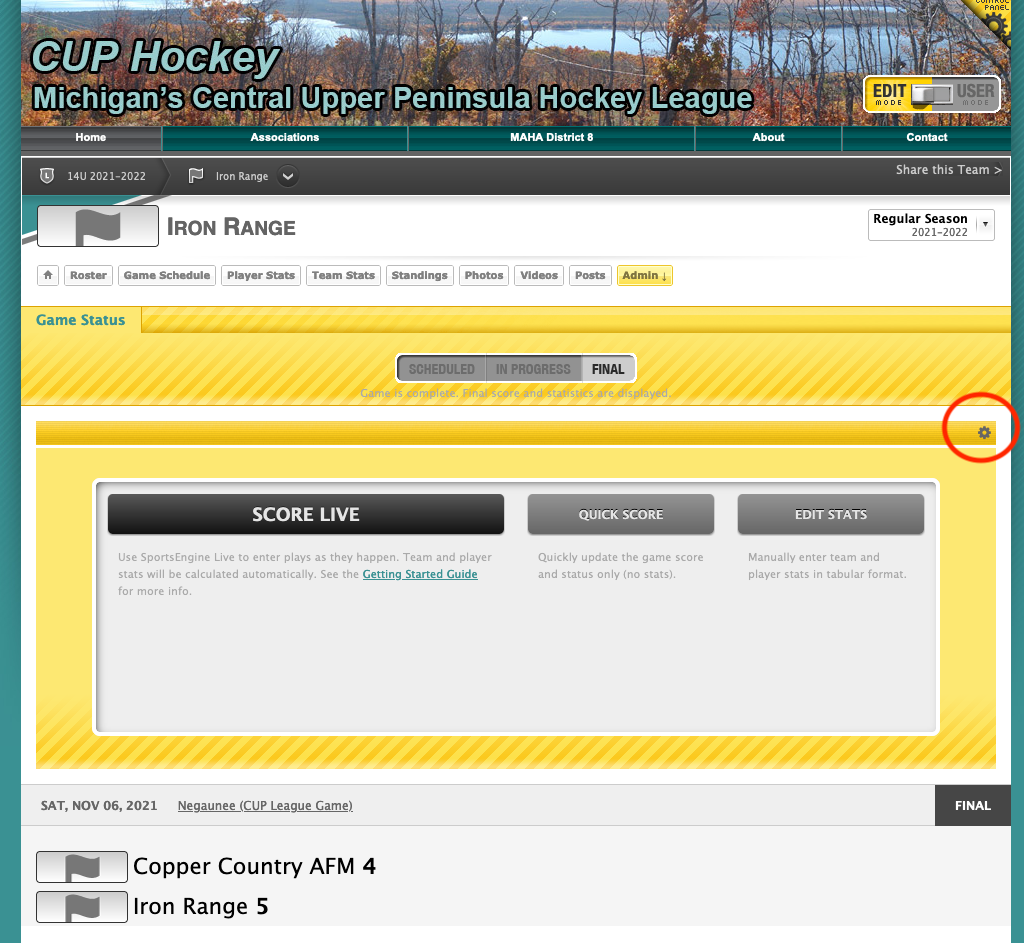 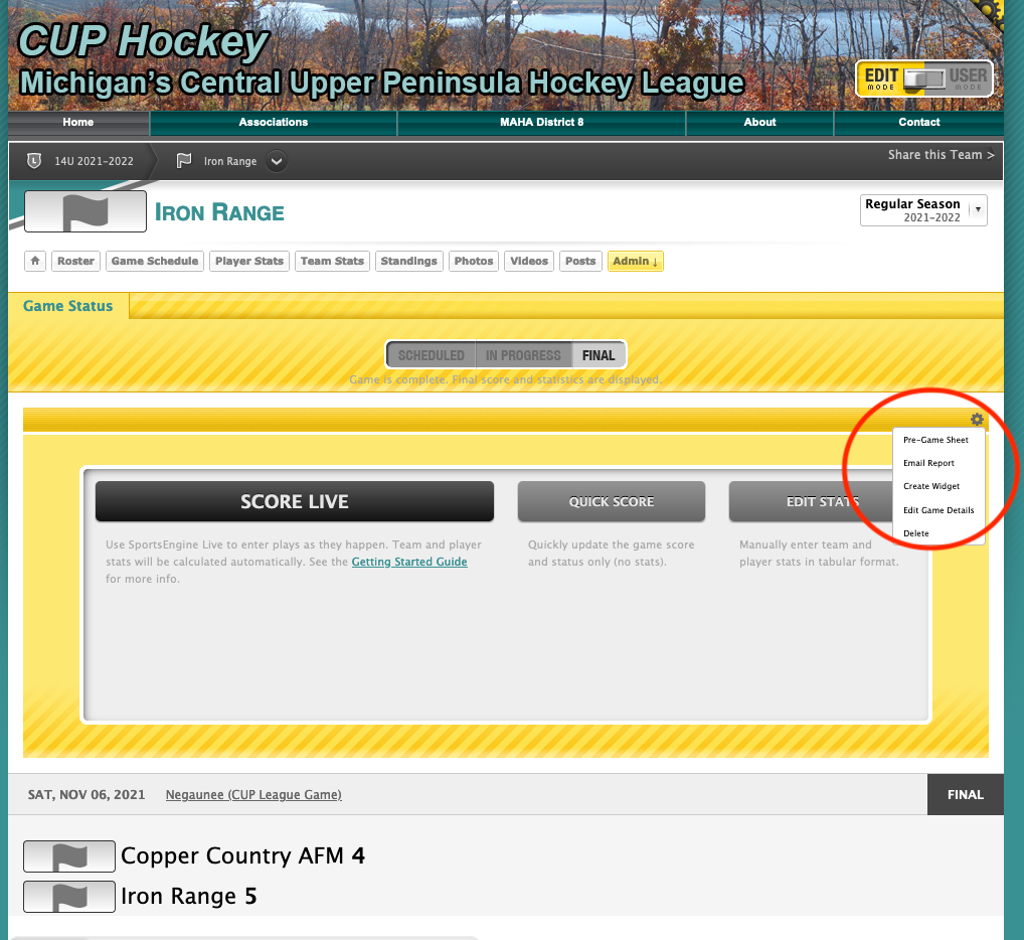 Clicking on that button will bring up a new window.  In that window, you can change the date and time of the game.  You can also add notes.  Don’t forget to scroll all the way down and save your changes!

You add your scores by either clicking the “Quick Score” button on the page shown above, or hitting the QS button on the very far right side of the game list.  Enter the goals for each team, and don’t forget to change the Game Status to “Final”!

If you want to, you can add a lot of information to your team page.  You can add rosters, calendar events such as practices or meetings, player and team stats, game stats, photos, news items, etc.

Your CUP League games will be added automatically by the Secretary/Statistician, but with the wrong date. The location will be given for these games, and the location will be followed by: (CUP League Game).  This will make it easy to see which games count in the standings.

If you add non-league games, do not use the phrase (CUP League Game) after the location;  just enter the location.  Otherwise it will be a struggle to identify the games that count in your game list.

Here’s how to add games.  Make sure you are logged in and in Edit mode on your team page.  Click the Game Schedule button on the top.  You’ll see a button for Add Game in yellow right on top.  Click the Add Game button.  You will get a new window: 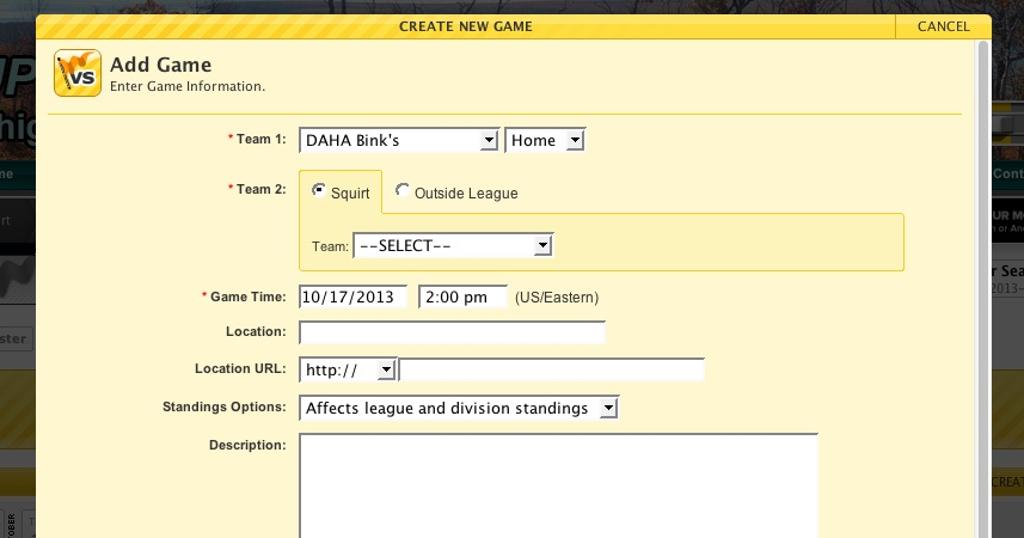 You can choose the date and time, location, home/away, etc.  Choosing the opposing team is tricky, and is explained later.

Important:  You have to change the "Standings Options" to "Does not affect standings."

If you make a mistake, this can be changed later in the same “Edit Game Details” window that you used to change the date.

If you are playing another CUP League team that is in your league (e.g. squirt), but it is not a CUP League game, simply select the team from the drop-down menu, and don’t forget to change the status to “does not affect standings”.

If you are playing a team that is not in the same CUP League as you, it is not so easy.  Sport NGIN does not allow you to simply type in an opposing team;  you have to select one that is in the system.

We have set up a “League” of Non-League teams for this purpose.  If you have a non-league opponent on your schedule and you want the games to show up on your team page, send an e-mail to cup@cuphockey.org with the name of the team.  We’ll add the team to the non-league “League”, and then you’ll be able to select them as the opponent.  Send them all at  once if you want.  Over the course of the year, we should get a pretty good list.

For this purpose, it is probably good enough to list “Eagle River, WI” as a team and not worry about whether they are squirts or midgets.

When adding non-league teams, it should default to “does not affect standings”, but please check anyhow.

Don’t forget to scroll all the way down and “Save” your changes!